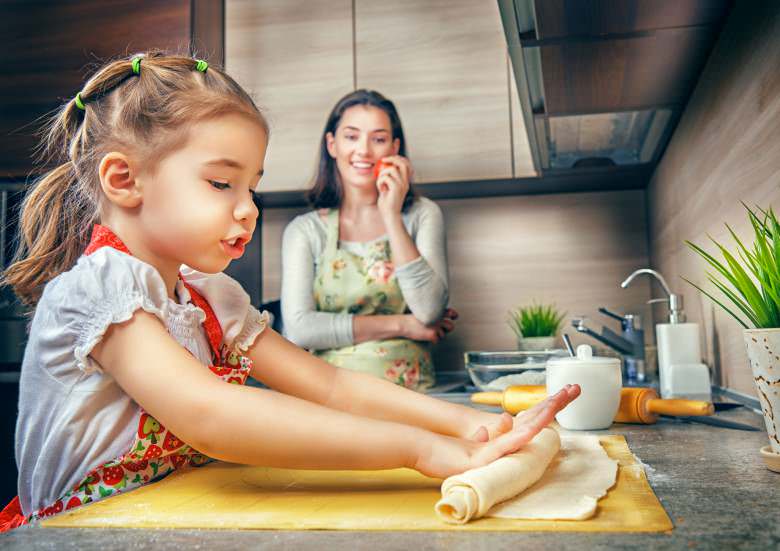 Youngsters beginning to speak (around 12 months of age) tend to speak about what interests them, therefore, a key strategy that should guide caregiver language is to follow the child’s lead. In doing so, we are more likely to obtain a spontaneous imitation or utterance expansion from the child if we simply comment on that in which the child appears to be interested.

2. Ask fewer rather than more questions.

The natural flow or turn-taking that characterizes conversations between caregiver and child proceeds more easily when the caregiver asks fewer rather than more questions. In other words, the frequent or rapid firing of questions to a child typically disrupts or interrupts the child’s train of thought and disrupts the flow of back and forth conversation. Rather than frequent questioning of the child, the caregiver will be more successful when providing comments that follow the child’s interest and target the child’s particular topic or focus in play. For example, if the child is building a tower with blocks, the caregiver might say, “Wow that tower is very tall!”

3. Expand or enhance the child’s utterance.

Thus, rather than directing the child’s play and language by telling him what to play with and what to do, the caregiver will get the most bang for the buck, by expanding or enhancing the child’s utterance. For example, if the child is playing and says, “Wash baby!” The caregiver might say, “Oh, the baby needs a bath!”

Rather than directly telling the child to repeat or “Say…” certain language formulations, indirectly model the correct formulation.  Best practice advises us to provide the actions and simple comments in a more naturalistic manner, with a playful and perhaps upbeat intonation pattern. This will often be perceived by the typical toddler as an ‘invitation’ to imitate or practice the spoken form. Even when the child produces a language form that is incorrect or incomplete, the caregiver is advised not to make explicit corrections, but rather to indirectly model the correct formulation. Thus, if the child says, “Look! Two boot!” the caretaker should simply say, “Yes, two boots.”

5. Do not compare your child’s speech and language to his peers, siblings or other family members or friends.

Since children all develop at their own rate, it is not advised to compare one child to his siblings, cousins, or neighbors.

6. Have a professional speech-language evaluation if there are parental concerns about the rate or nature of your child’s speech and language development.

Since children progress according to a unique pattern, if there is concern about the rate or nature of the child’s language development, it is advisable to have a professional speech-language pathologist evaluate the child to determine if the child has progressed sufficiently and whether there is a need for continued monitoring of his or her language skills. If there are continued parental concerns about the child’s language development, and if there is a question about whether progress has been sufficient, the speech-language-pathologist will screen the child again after a specified time, to determine if he or she is making sufficient progress on his or her own. (Younger children need more frequent re-evaluations.)

7. The caretaker or nanny will be better equipped to facilitate the child’s language if there has been a consultation with a licensed SLP.

Once the caretaker has consulted with a certified speech-language pathologist, and has gained a better understanding of the child’s language capabilities, he or she will be better equipped to guide the child and facilitate his or her language.  Thus, the caretaker will know whether to focus on vocabulary enhancement, syntax or sentence formulation, meanings in words and sentences, or the practical or pragmatic functions that language can serve.

8. Share books with the child in a playful way that models word and sentence meaning, as well as language use.

This is an exquisite way to enhance the child’s language abilities.

9. Caretakers or nannies can benefit greatly from sessions with a competent speech-language pathologist.

For children receiving speech and language enrichment from a certified speech-language pathologist, the youngsters will benefit enormously if the caretaker or nanny is present during language therapy sessions.

This is an invaluable way to help enhance a child’s language. Most importantly, play and language are the foundations to literacy.